Sketchfest is giving Bumbershoot a taste of Seattle sketch comedy this year! We’re highlighting all the performers in this space all month long to give you a special inside glimpse into the who’s who of our Bumbershoot acts. This week we talk with the woman named “Best Comedian” by Seattle Weekly’s 2013 “Best of Seattle” and our esteemed host for the Bumbershoot show: Jen Seaman!

How’d you get into standup comedy, anyway?

Jen Seaman: I’ve been performing for over six years now. I love the feeling of making someone laugh; it’s a sincere and involuntary response that gives an immediate sense of gratification to both the audience and the comedian.

Have you ever dabbled in sketch comedy?

JS: My folks like to call it “your little skits,” which always makes me visibly shudder. In high school I performed in an improv club called The Players Club which, unfortunately, had no rap affiliations. I performed in sketches through college and I’ve even done some on Comedy Central’s AtomTV. The thing I like about sketches is you know where you’re going in most cases. Also, there’s generally less heckling involved. 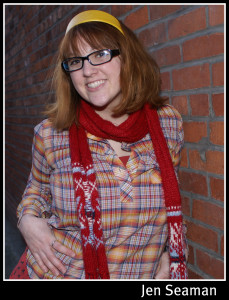 What a rip! She promised us an autograph!

What’s your favorite kind of comedy?

JS: Honestly I like it all, from “cerebral” to pratfalls to just silly stuff. There are comedians who can combine genres to be funny. I think my favorite is the sharp-witted stuff, or at least that’s what my mom would want me to say so I sound smart. And I really appreciate my family. Also, I’m not fat. On the inside.

Who are you most looking forward to stalking at Bumbershoot?

JS: If I told you who I’m going to stalk they’d have a leg up and that’s kind of what I was hoping would happen after I saw them. What? No no, I have a boyfriend. I think he knows I’m his girlfriend. If not, that whole speech about being the “key master” was for nothing.

I’m excited to see Emily Heller. Someone said I look like her, but I think it’s just hard for people to tell stunning, bespectacled red-heads apart. I’m also excited to see Reggie Watts, Patton Oswalt, Todd Barry, Morgan Murphy, Natasha Leggero and pretty much every awesome comedian because this year’s lineup is fantastic both for national acts and locals.

What’s the worst gig you’ve ever had?

JS: Do you seriously want to go there? I mean…we can GO there. There was a Build-A-Bear by Day type of business that was trying to be a comedy club at night. It was run by a woman that reminded me of Miss Havisham in her long old wedding dresses that she wore for the little girl parties she hosted.

My boyfriend at the time asked her if this was one of those places were kids made stuffed bears and she immediately informed him that this was where bears came to “be born.” She then, completely serious, showed us a part of the store that she called her “unicorn garden.” The green room was filled with old wedding gowns and make-up.

I think the median age of the audience was 72 and I was told not to make jokes about my last name (editor’s note: thank god she brought it up so we didn’t have to) because it would be “too risqué.”

Besides hosting the Bumbershoot show, where can people find you?

JS: I’ve just created a new web series called The Filling is Mutual where we take a comedian’s joke and create a fun recipe of a new dessert based on their joke. I’m pretty much always performing around the area so check out my schedule and come see me sometime.

If you had to give an aspiring comedian some sage advice, what would you tell them?

JS: Sage advice? Grind it up and grill it on some chicken.

For stage advice I’d say just go up there and do as many open mics as you can until you start feeling comfortable with yourself. Know that your material can always change, just like your audience.

See Jen’s standup stylings as she hosts the Sketchfest show at Bumbershoot on August 31! And be sure to check back next week for our next chat with Bumbershoot performers!