I want to take a moment from our usual sketch news and reviews to tell you a comedy-related anecdote.

I was out in Washington DC this weekend visiting the wife while she’s there for work. We decided to visit a friend at her store in Bethesda on Saturday, and after we’d spent some time there, we went to explore the neighborhood. We hadn’t gotten but two doors down before we were lassoed into a conversation with our friend’s retail neighbor – a hair stylist named Marta. 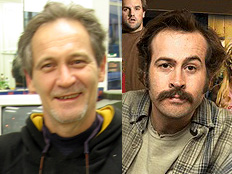 She invited us into her shop for cappuccino. We’d learned long ago to jump on East Coast hospitality on the rare occasions its extended, so we followed. Besides it was a cold night and a cappuccino in an Italian family-owned barber shop sounded good (and was!).

Inside we met Marta’s glowingly patriarchal father, Frank, and another man who was either a cousin or family friend (they told us, I just forget) named Doug Lucky.

Doug was finishing up on some plumbing he was doing for Frank and Marta, and as it was the end of the day, we sat around, drinking coffee and shootin’ the shit. It started out as your usual DC-area fare: construction on the beltway, the Redskins, etc, but after a little while his niece’s husband came up.

“As I was telling Greg … have you heard of Greg Thomas Garcia?” I said it sounded familiar, but I couldn’t place it. “Oh, well, my nephew Greg writes for television. He wrote for Family Matters – you know, that one with the Urkel kid – a show called Yes, Dear, and now he’s created a show called My Name Is Earl.”

That alone was pretty cool, but he continued.

“As a matter of fact, Earl is based on me.” My eyes widened. I mean, I’ve talked to my share of delusional crazies – I’m in comedy after all – but Doug was completely convincing. Not only the fact that Frank and Marta backed him up and that he looks like Jason Lee in twenty years (“Oh my God,” Marta said, “I wish I could get that photo of you in the seventies! He had the mustache, the crazy hair and everything! Looked just like him!”), but “Doug Lucky” has a certain phonetic similarity to “Earl Hickey.”

“Yup. I’m an old hippy,” Doug continued, “I hitchhiked around the country and picked up a few good stories. I even won a bunch of money from the lottery back in the eighties! Anyways, Greg always liked my stories and said he thought they’d make a good show. Half the things that have happened on My Name Is Earl happened to me.”

According to Doug, if the show continues being successful and makes it to syndication, he’ll start receiving royalties every time an episode airs.