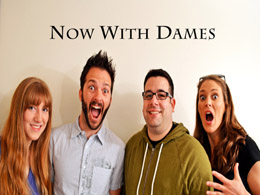 Here at SketchFest we’re just fans of comedy. We love watching the amazing, the avant garde, and even the unintelligible stuff in the Seattle sketch scene. But we have a special place in our heart for groups like Now with Dames, who just keep putting on great shows and making them better and better every night.

Cory Bailey, Kristy Brannon, Kenny Davis, and Jimmy Sorrentino have slowly but surely gained ground in the Seattle comedy scene to become some of the more prolific performers in town. Their videos infiltrated our Facebook timelines while they’ve taken their shows to stages like The Rendezvous, The Pocket Theater, and Bumbershoot. They’ve even put together their very own baby! Not, like, all of them together. But they kept producing and performing top-notch shows even while Cory was busy procreating, and we have to admire that sort of dedication.

Their formula is simple: character work, musical numbers, news segments, recurring episodic content, and standalone show themes. Actually, that’s not very simple at all now that we think of it. But somehow Now with Dames has mastered it!

Come see Now with Dames headline SketchFest with LA’s own Lilan & Wilder on Friday, September 26, 7p at The Annex Theatre!

You can also see a special Now with Dames performance at the SketchFest PreFunc show: September  18, 8p at The Pocket Theater!