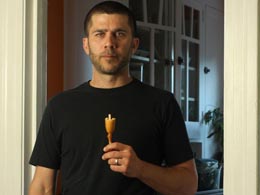 SketchFest isn’t just about sketch comedy, y’know. We like to make it a celebration of everything that cracks us up, which is why we bring in our favorite stand-up comedians to kick off every festival show. So meet Brett Hamil:

Brett’s a Seattle-based stand-up who’s made a name for himself with his one-man sketch show, Ham Radio with Brett Hamil, his videos shared across sites like Upworthy and the Daily Dot, and his sets at venues like Bridgetown Comedy Festival, Northwest Comedy Fest, and Bumbershoot. Oh and he also writes for City Arts Magazine, because why not make you feel worse for your own relatively meager comedic output?

Brett’s kicking off the festival proper on Friday, September 26 at 7p. Get your tickets now!