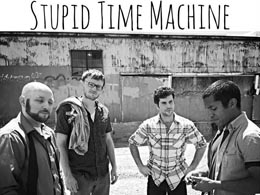 The Big Easy might not be at the front of your brain when you think, “Comedy Cities,” but the fellas in Stupid Time Machine are changing that with hilarious touring shows that have delighted people at hip spots like SF SketchFest, New York International Fringe Festival, and Moontower Comedy Festival.

Whether they’re running an original sketch revue or making it up as they go with an improv show, Stupid Time Machine bring a sense of ambition that makes you cheer for the Gulf coast as the next great comedy hot spot. The performers are also co-founders of The New Movement, a professional theater and training center with spots in Austin, TX and New Orleans, LA.

One night only: Saturday, September 27, 7p at The Annex Theater.